A HISTORY OF PLATEAU PROPERTIES

I am quoting from CUMBERLAND COUNTY'S FIRST HUNDRED YEARS by Helen Bullard and Joseph Marshall Krechniak (1956).


The Neidringhaus brothers, W.F. and F.G. entered the land picture in 1893 ... They were associated with Jos. B. Johnson ... [they] organized as the Cumberland Coal & Coke Company ... In 1894 they put up a small office building.
... And that building is the one I am sitting in right now as I write this. 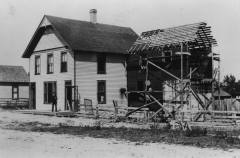 FIRST BUILDING ADDITION
Mr. Lee I. Niedringhaus, grandson of W.F. Niedringhaus, visited us and gave us photographs – of which this is one – and publications he had written. This picture shows the first addition. It required a new pot-bellied stove for heat. The base is of hand-hewn (ashlar) blocks of "Crab Orchard Stone", a sandstone found on the plateau. The new addition had a vault which is still in use and which still contains some of the original records. 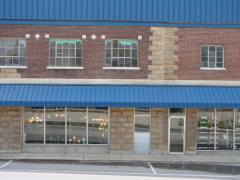 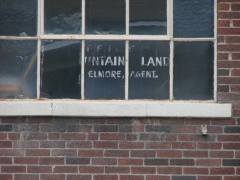 WINDOW CLOSEUP
Lee was also doing research. He mentioned the "Black Mountain Land Company" and I was surprised when he pointed out the barely visible sign in a window of a neighboring building that now houses Wholesale Supply. 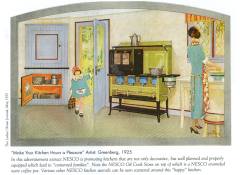 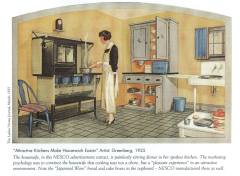 1925 KITCHEN
I find these old Ladies Home Journal ads very interesting. I swiped them (with permission) from National Enameling & Stamping Company, The Early Years 1899-1928 (2005) by Mr. Niedringhaus. Click the photos to get an enlargement, and you'll see the "Granite Iron Ware" in the cabinets and on the stove, the sale of which provided part of the funds used to invest in Tennessee property. Note that the stove burns oil. Of course, there was neither electricity nor gas. Interestingly, when Mr. Johnson built his house in Crossville, he plumbed it for gas. There was a generator out back that dropped carbide into water to generate acetylene. That house is still standing, and the evidence of the gas lines remains to some degree. The main post at the base of the stairs has a hole where the line went to feed the gas lamp there. 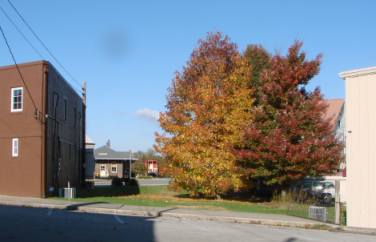 The original intent of the Tennessee investments was not to profit from the sale of property, but rather the sale of coal and timber. The building was built alongside where the railroad was to be run. I presume this was to keep a watch on coal cars. A major trestle was required to pass over a gorge at Ozone, in east Cumberland County. Much later, that trestle needed expensive repairs. The railroad simply took up the track instead of going to that expense and sold the property the track had occupied. Oops. I don't think that was really in the county's best interest. Note this photo. In the center is the depot with a red caboose. The building on the left, formerly the Wooden Acorn gift shop, is shaped as a triangle to fit the corner of the lot left when the train track was still there. The Plateau Properties building is behind the trees on the right.

I assume the mineral business was as speculative and dangerous as it is now. The companies reorganized and changed hands. The assets were acquired by George E. Harrison, Sr. and later, the building was acquired from Mr. Black. A brick front was added. In 1960, the office was organized as Plateau Properties, Inc. PPI didn't take possession of the lands, but rather cared for a trust that owns the properties. The businesses at what is now 118 North Main Street were never wealthy, but the sale of land was a more stable business, and PPI contiues today.